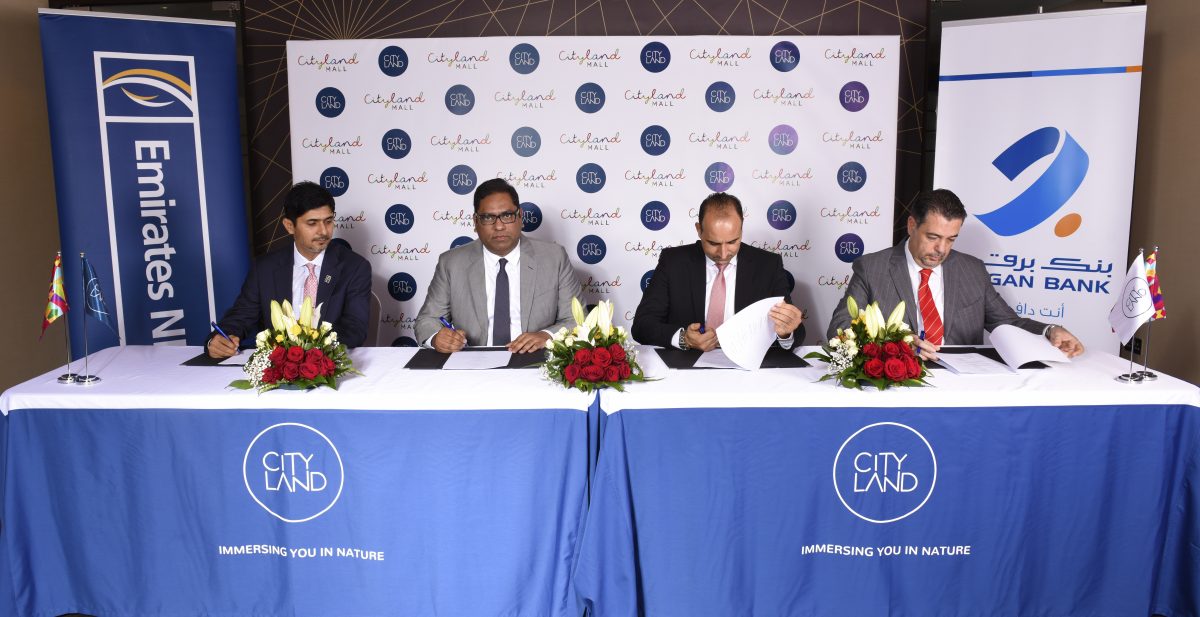 Cityland Group today announced a major financing milestone for the USD 330 Million flagship retail project – Cityland Mall – from a consortium of banks consisting of Emirates NBD as the lead bank and Burgan Bank from Kuwait.

The loan, which totals USD 142.74 million in value, will be utilized for covering the ongoing project cost in terms of construction for Cityland Mall which will be the only major destination mall opening in 2018 in Dubai.

Speaking on the occasion, Fahimuddin Sharfuddin, Chief Executive Officer and Board Member, Cityland Group said: “Securing this term loan from Emirates NBD and Burgan Bank is a significant development and signifies their confidence in the overall concept of Cityland Mall and the capabilities of the group. With construction work well under way in addition to having the commitment of leading regional retailers, we are pleased with the overall momentum on the project and look forward to being on track to hit our project milestones in order to open our doors to the public in 2018.”

Salah Mohammed Amin, General Manager – Corporate Banking Group, Emirates NBD Bank said: “We are delighted to be associated with this unique project that is strategically located and look forward to its official unveiling in 2018. Cityland Mall project is a fresh proposition that is expected to stand out in Dubai’s existing retail landscape and become a sustainable venture that generates stable revenues.“

Ahmed Al Qassim, CEO, Emirates NBD Capital said: “We are proud to be part of this landmark project which will be another addition to Dubai’s retail offering, reemphasizing Dubai’s position as the top retail destination in the region.“

On the occasion, Mr. Raed Al Haqhaq, Deputy Chief Executive Officer-Kuwait of Burgan Bank, Kuwait stated: “We are pleased to be part of this mega one-of-a-kind ‘Cityland Mall’ project, which is the world’s first ‘nature-inspired’ shopping destination in terms of both architecture and its anchoring role in providing a unique sensory experience for shoppers.” He added: “Burgan Bank continues to support its clients in fulfilling their milestones in executing their strategic projects that in turn enhances the development of communities across the region.”

In terms of leasing arrangements, agreements are already in place with operators for 30 per cent of the leasable space available. Cityland Mall will eventually have 350 stores built around six continent-themed pavilions. Hypermarket and supermarket chain Carrefour, operated by Majid Al Futtaim will open a 100,000 square foot hypermarket in Cityland Mall while VOX Cinemas will also have a presence with a 10-screen complex providing a choice selection of F&B options and signature concepts.

Construction work on the 2.2 million square feet mall complex is well under way and is being supervised by JLL as the project manager. MEP (Mechanical, Engineering and Plumbing) works are now in progress for all areas. The focus has been on the critical areas of the project that will house the hypermarket, family entertainment areas and the foundations for the main feature of the mall, the circular timber arched walkway that surrounds the Central Park.

Cityland Mall which is the world’s first ‘nature-inspired’ shopping destination will feature a 200,000-sq-ft open-air garden called Central Park which will be the epicenter of the mall in terms of both architecture and its anchoring role in providing a unique sensory experience for shoppers.

Cityland Mall will also be a prime attraction for various communities in Dubailand area such as Arabian Ranches, Marjan, Al Barari, Layan, and Falcon City amongst many others who live along the Sheikh Mohammed bin Zayed Road corridor and end up travelling up to 30 minutes to access a superior mall experience.

Click here to assign a widget to this area.